Awards and Rewards for Volunteers at Prestigious Coast Care Awards 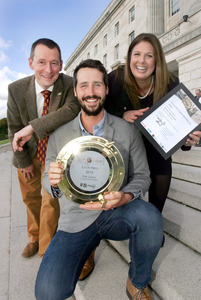 Volunteers who have gone the extra mile to clean up and look after our coastline, loughs and inland waterways have been recognised by environmental charity Keep Northern Ireland Beautiful as part of the prestigious Coca-Cola Coast Care Awards and Seminar event held at Parliament Buildings, Stormont.

Anna Lo, Chair of the Northern Ireland Assembly Committee for the Environment, presented the dedicated volunteers with their awards along with Northern Ireland’s very own mentalist David Meade who hosted the event.

The Coca-Cola Coast Care programme supports the work of volunteers who clean up beaches, rivers and loughs throughout Northern Ireland. With the continued support of Coca-Cola and Tourism Northern Ireland, Coast Care Awards recognise and celebrate the outstanding work of local people who are passionate about caring for Northern Ireland’s coastline, loughs and inland waterways and who carry out practical work in a bid to reduce the impact of litter and other environmental damage to preserve the natural beauty of these areas.

To celebrate the continued success of these awards, two worthy groups were awarded funding through the Live Here Love Here Coca-Cola Community Grant Scheme for coastal and inland waterway projects that demonstrate a benefit to their local environment or wider community.

The day awards and rewards even celebrated the beauty of Northern Ireland’s Coastline and Inland waterways through the Picture Perfect Award supported by Tourism Northern Ireland, this award captures our beautiful scenery through one single stunning photograph.

Speaking about the event, Environment Minister Mark H Durkan said, “I thoroughly commend the dedication and commitment of those individuals of all ages and across the North who selflessly give up their spare time to ensure that our stunningly beautiful coastline and waterways are kept in pristine condition. I want to take this opportunity to thank each and every one for the vitally important contribution they make.

“This year we saw the introduction of new, tighter EU standards for bathing water quality. In spite of this, our bathing waters still performed extremely well and are in fact among the best in Europe. And it is in no small measure that our army of volunteers help to build upon and improve our coastal areas as fantastic places to spend time.

“I would encourage others to follow their shining example and get involved, whether in one of the many existing projects or to get inspired and start one in your own area. Perhaps you know of a stretch of overgrown waterway or corner of our coastline which would really benefit from some TLC. We want to hear from you.”

Chair of the Committee for the Environment, Anna Lo said: “It is only right that we take the time to recognise and appreciate the enthusiasm and hard work of our volunteers. Each volunteer devotes so much of their spare time to improve, protect and enhance our natural environment; so that we can all enjoy the benefits that that brings. Their commitment and work should not be underestimated.”

Dr Ian Humphreys, Chief Executive of Keep Northern Ireland Beautiful, said: “Our long-standing relationship with Coca-Cola to reward the hard work, community spirit and sheer persistence of volunteers who regularly clean up our coast and inland waterways is simply inspiring. At this event we take a little time to celebrate the achievements of passionate ‘can-do’ people to keep Northern Ireland’s shores, loughs, canals and rivers beautiful. Through their freely given time it is obvious they really do live here and love here. To everyone involved, well done and thank you.”

Gillian Shields, Community Engagement Manager, Coca-Cola HBC Northern Ireland said: “We are delighted to partner with Keep Northern Ireland Beautiful and support the Clean Coast and Coast Care programmes. These awards recognise and reward the tremendous contribution and practical action being taken by individual and groups across Northern Ireland in looking after our much treasured beaches and waterways. Congratulations to all the beach managers and local communities from around Northern Ireland on achieving these prestigious awards."

John McGrillen, Chief Executive, Tourism NI, said; “Northern Ireland boasts some of the most spectacular coastline in Europe and this is one of our greatest tourism assets. Volunteers and community groups make a huge contribution to taking care of our coast and we are delighted that that these efforts are being recognised through the Coast Care Awards. Tourism NI is again proud to sponsor the Community Contribution to Tourism Award and the Picture Perfect Award.”

Love Your Lough (Newry, Mourne and Down District Council)